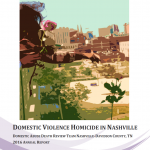 2016 DADRT Report (click to open) reviewed a strangulation homicide between intimate partners.  Strangulation is a deadly use of force that increases a person’s risk of being killed more than 7x. 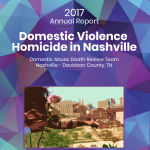 2017 DADRT Report (click to open) reviewed a firearms murder-suicide between intimate partners.  Recommendations from the report include: 1) Murder-suicide risk should be assessed more specifically; 2) Firearms dispossession must be implemented effectively; 3) Workplace domestic violence policies should be policy in all workplaces. 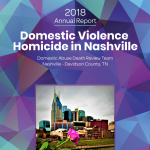 2018 DADRT Report (click to open) reviewed a familicide where the perpetrator killed his spouse and their child.  Recommendations from the report include: 1) Expanding Lethality Assessment administration; 2) Addressing Legal Manipulation by perpetrators; 3) Providing more community education & support; 4) Reframing “bullying” as abusive behavior and addressing its development from adolescence; 5) Increasing identification & support for children exposed to domestic violence. 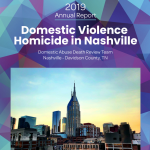 2019 DADRT Report (click to open) reviewed a domestic violence murder-suicide in which a man murdered his long-time partner with a firearm before taking his own life. Recommendations from the report include: 1) Effective implementation of firearms dispossession; 2) Support for families impacted by violence across generations; 3) Identification and support for children impacted by domestic violence; and 4) Education for faith communities and leaders on recognizing and addressing interpersonal violence. 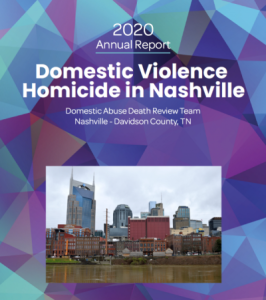 2020 DADRT Report (click to open) reviewed a murder-suicide case in which a 53-year-old mother of two was shot to death by her husband, who then turned the gun on himself and died by suicide. Recommendations from the report include: 1) Examining the workplace impact of domestic violence; 2) Effective implementation of firearms dispossession; and 3) Increased public awareness of domestic violence in Nashville. In addition to the case review, the Domestic Abuse Death Review Team examined the unique lessons learned from serving survivors of domestic violence through a global crisis in the section ‘COVID-19 Impacts and Implications.’ 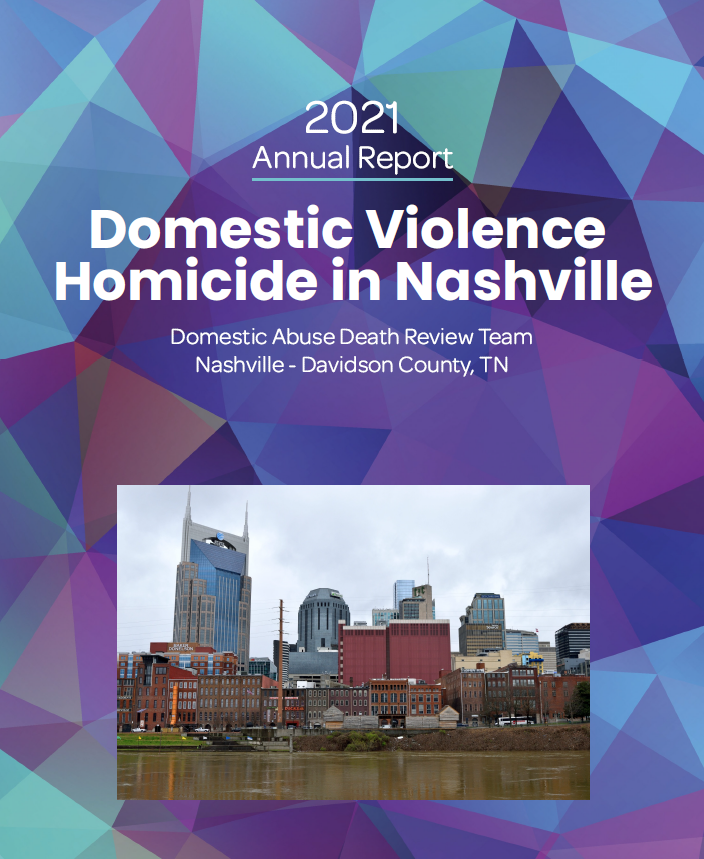 2021 DADRT Report (click to open) In 2021, DADRT reviewed a homicide case in which a 35-year-old mother of three was run over by a car driven by her boyfriend. The DADRT’s research into this case revealed a history of escalating violence that ultimately culminated in her murder. The Domestic Abuse Death Review Team identified three finding areas that may have contributed to the victim’s level of risk or impacted the support that she and her family received before her
murder. The Findings address 1) Public Awareness, 2) DV Education and Screening for Low-Level Drug Offenders, 3) Relational Risk Transfer.

In accordance with Executive Order No. 016 issued in August 2002 by Mayor Bill Purcell (updated in 2008 by Mayor Karl Dean) and authorized by Tennessee Code Annotated §36-3-624, the Metropolitan Government of Nashville Davidson County created the Domestic Abuse Death Review Team (DADRT) to “establish an interagency domestic abuse death review team to identify and review domestic abuse deaths, including homicides and suicides, and to facilitate communication among the various agencies involved in domestic abuse cases in order to recommend improvements in the system of services to domestic abuse victims and their families, and to provide accurate information related to domestic abuse issues to the community.”

DADRT does an in-depth review of 1-2 domestic violence homicides per year. Reviewed cases must be considered closed by Metro Nashville Police Department and the Nashville District Attorney’s Office and at least six months must have elapsed from the time of death in order to interview family members and other close associations of the victim and/or offender.

DADRT shares its findings from the review and its recommendations in an annual report submitted to the Mayor’s Office.

Of the voting members, a minimum of one member must be a survivor of domestic violence. 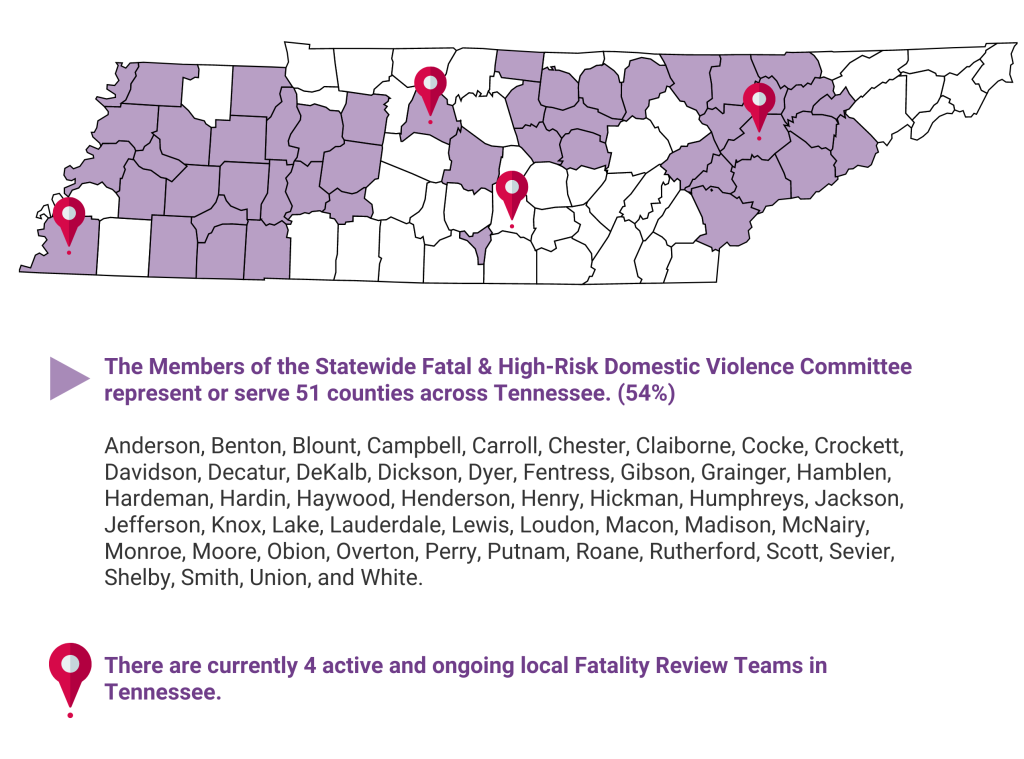 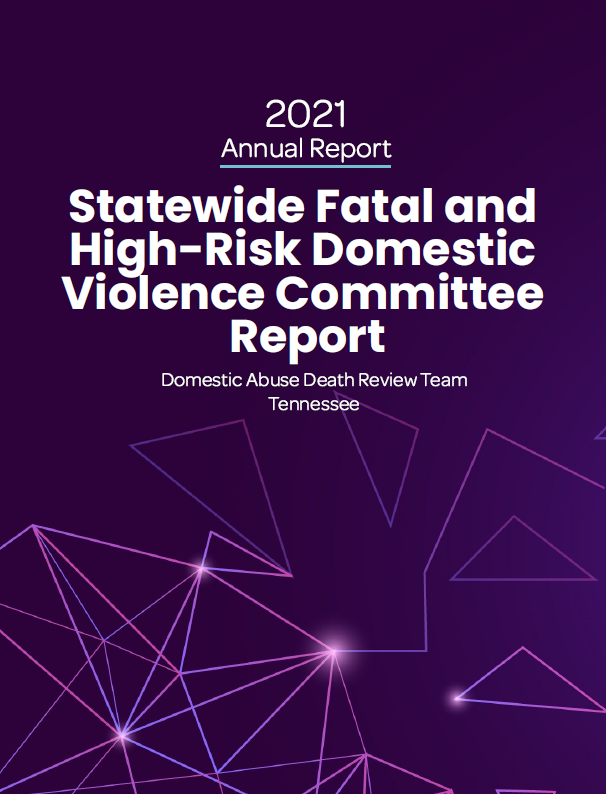 In keeping with the Committee’s three primary areas of focus, the Committee dedicated a significant portion of its work in 2021 to identifying prevailing systemic barriers that adversely impact survivor safety on
a statewide level. The Committee has identified the four following findings as well as recommendations for policy and legislation changes that could improve domestic violence victim safety, increase offender accountability, and promote the prevention of domestic violence homicides on a statewide level.

OFS provides technical assistance to developing teams throughout the state of Tennessee.  During 2020 the counties below were provided resources, technical support, training, & other assistance to sustain or help create Domestic Violence Fatality Review Teams. If you are interested in starting a team or developing your existing team, please contact our team at OFSHighRiskTeams@jis.nashville.org.

Meet Us at the Bridge- Honoring Domestic Violence Homicide Victims